Out of the building cradle

On friday i lifted the Gig out of her building cradle ready to roll her over ready for final fairing & painting. 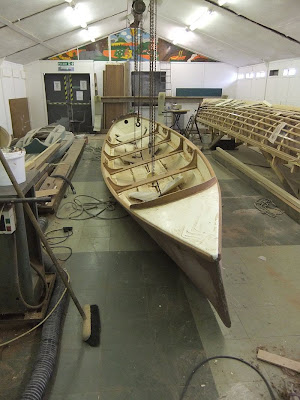 In the background are the rear doors to the shed, there is 1" clearance each side, and yes i have measured it!
I have worked out a good way of doing the stretchers but it will entail some stainless steel welding, I had better get some practice in!

Once rolled over i started fairing, didnt go well at first as the the filler i had skimmed her with clogged the sandpaper really badly, i identified the problem as the vinylester laminating resin i had used being unwaxed. This meant that the surface although cured had a faint tackiness. Remedy was to get a wide carbide scraper & scrape the surface layer off, several hours later with arms dropping of she was ready for a sand down & first coat of Hi build primer.
The hull is very fair & the time spent on the building jig was well spent. 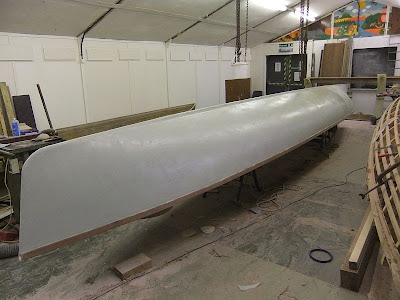 The primer is a Hempels two part epoxy intended for superyachts, the local chandler has a job lot of the stuff. Downside was it stinks something awful & i had to open the doors & windows wide.
Overnight it had cured well enough for a rough sand up before the second coat.

The second coat went on this morning & by lunchtime was touch dry
Back to the sanding tomorrow if its cured enough!

Im looking forward to the not too distant future when you can see her out on the water not stuck in a shed!