Back on the Gig

About time i gave you an update! Had to have a week away from the Gig working with a scrap dealer friend. A local school were closing their Design & technology department down & we put a bid in a while back for all the equipment & won it.
I fear its a sign of the times, lack of investment over the years & schools & colleges becoming risk averse just in case little Johnny cuts himself or gets hurt. Its leading to generations of Kids having no knowledge of tools, woodwork or metalwork (Sorry its called "resistant materials" now).
Thing is as i see it, not everybody is cut out to be a software developer, or media studies wizard some youngsters actiually want to make stuff & there is increasingly precious little oportunity for that.
For the schools & colleges its cheaper to fill a room with banks of computers & teach gaming design or IT than invest in new tools & machinery.
Anyway we cleared the workshops, machines, hand tools, benches, materials the lot.
Took us 3 days of hard graft but hopefully it will be worth it!
We are thinking to put some good tool kits together for apprentices, all good British tools & no far eastern tat!
More on this subject shortly!

Back to the Gig, the jig is all covered with parcel tape so nothing sticks to it and this morning i started fitting the foam, got half a side on in a couple of hours. 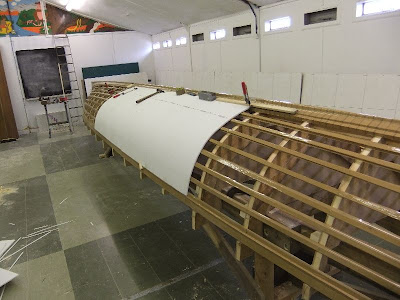 Its going on nice & fair, screwed on from the inside, to be honest if i was doing it again i would space the stringers out a little bit as my arms are just a bit of a tight fit to go between them which means i have to keep ducking underneath, to put the screws in. Still its a learning curve!