I built this shapely boat back in 88, she is a Pete Culler Whitehall which was originally built as a pair of boats for the replica of the Schooner America.
She was cold moulded from western red cedar veneer with oroko & ash trims.
Many people regard the Whitehall as one of the ultimate working rowboats. 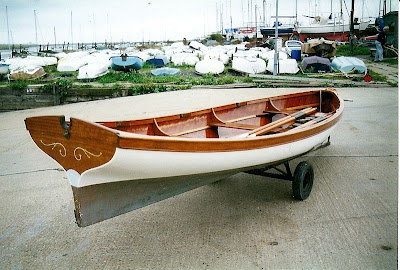 She was undoubtedly fast but her draft & ruler straight keel meant she was very hard to turn. She was also trim sensitive and did not like being nose down.
I did my first Great river race in 1990 in her, a great experience but she was handicaped most horribly by the organisers!

later she was used in the Sky mini tv series "Scarlett" the sequel to Gone with the wind. In this she was fitted with a spritsail rig and had to sail in a storm on the Paddock tank at Pinewood studios. I got the job of technical adviser & was promoted to stunt double. Pity more jobs like those dont come along more often!
Posted by Unknown at 11:10