This is a good 18ft skiff, she is the same hull as was used on Hanningfield reservoir in deepest Essex. These were used as hire angling boats for fly fishing. The fleet was disposed of in 2002 & got split up.
It is clear that originally a mould was taken from a wooden boat as rivets were clearly visible in the old boats. Who built her & where is unknown.
The GRP boats were fitted with a heavy plywood & grp solid floor & heavy interior seat & gunwale moulding. They were appallingly heavy at over 700lds. 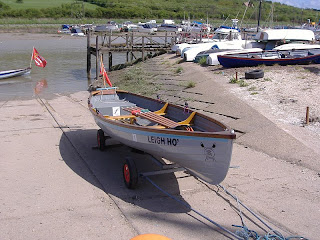 
8 more were built at Heybridge Basin & i acquired the mould a couple of years ago. The first boat i laid up was Zev, she was built as light as i could go with a combination of CSM & Biax cloth. She could be rigged as pair sculls, pair rowing, or Randan. As you can see she is capable of carrying a good load!

The skiffs have consistently done very well in the Great river race often winning trophies & featuring in the top placings.
Lara one from Heybridge was in the top 5 for several years. 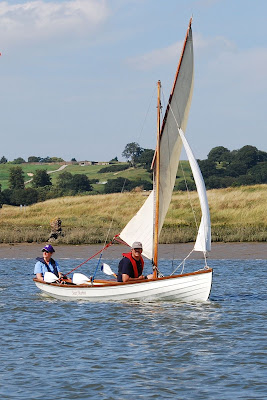 Here is another shot of Zev in the Round Canvey race 2 years ago, its a 14 mile race round Canvey open to all types of rowing boats plus sail & oar boats too!
I borrowed the lugsail rig from my wifes sailing dinghy the night before the race!
Of the wind or on a reach she goes like the clappers. To windward its time to get the oars out!