If ever a boat had a soul

A Funny title for a post but read on! "Billows" Is a Rye Beach boat, built as a sailing tripper boat probably to run out of Folkestone.
She was built in 1938 by Harry Phillips of HJ Phillips & Sons of Rock Channel Rye in Sussex. Apparently at this time the yard won a contract for 10,000 whaler sweeps for the Admiralty and so she was planked in Archangel white pine, a very tight grained spruce from northern Russia. Her framing was sawn oak floors with steamed timbers above to the sheer.
She came to Benfleet yacht club in 1946 when she was bought by AF Taylor known as "Buck". A consumate & careful sailor, He put a cabin on her & sailed her regularly until his death in 79. After that his relatives took her to the Broads.
In 1990 we were looking for a nice open boat & someone said "what happened to Billows?" A couple of phone calls later i had found that she still existed & yes she was for sale. A trip to norfolk later she was on her way home. 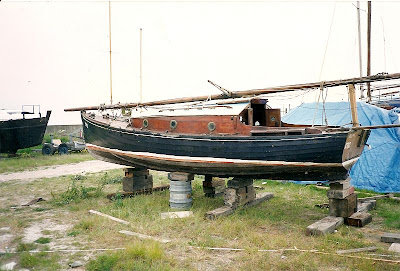 Here she is looking rather sad. She was a real time warp still with Bucks oilskins hanging on a hook in the cabin.
Two days later her rotten cabin was removed & she looked so sweet without it that the decision was taken to put her back to original. 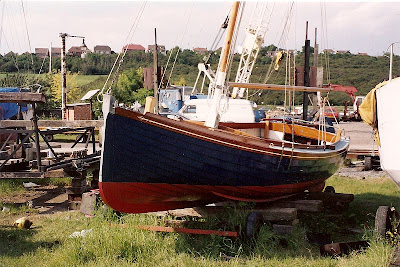 This shot was taken just prior to her relaunch & shows her sweet lines & planking.
Anyone who aspires to be a clinker boatbuilder could do worse than study this boat! 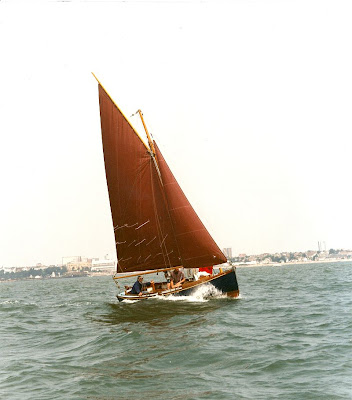 Rigged as a Gaff sloop she proved to be a superb sailing boat, I had made new hollow spars including a carbon & spruce gaff.
This shot was taken in the 95 Nore race on a windy day.
Half an hour after this was taken we were running downwind in a heavy wind against tide by the medway buoy when she took charge & nearly jibed.
The tiller broke of at the rudder head & she rounded up into the wind with green water pouring over her side.
The nearest i ever came to sinking a boat. We came last! 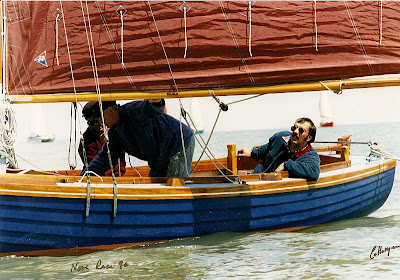 Two years later the same race with very light winds we won an embarrasment of trophies.
Every leg of the race was a Kite reach & this suited Billows rather well!
This is a poingnant shot for me as the guy in the middle Terry harding was diagnosed with a brain tumour a week later & was dead within months.
Gareth Jones on the left died of a heart attack aged 48 a few years later.


To this day it was the best days sail i ever had. Thank you for crewing lads & RIP.
And back to the title. Billows is a boat that gets under your skin. She has that Row away factor where when you leave her on the mooring you just have to row round her rest on the oars & just admire her.
If ever a boat had a soul she has.